Basketball is known to be a big man’s game, and extra size can definitely give one team an advantage over another.  Some teams, however, simply do not have the size to matchup with their opponents, so they employ a small lineup out of a lack of choice.  Other times, a small lineup can be used strategically, to give a team the advantage by using superior athleticism, speed, and quickness against their opponents’ bigger size.  Whatever the reason a smaller lineup is used, there are numerous advantages to be gained by playing what is known as “small ball.”

They can’t guard you if they can’t catch you.  When a team puts a smaller lineup on the floor, one of the biggest advantages gained in the ability to get out and run, jumpstarting the fast break offense.  Once your team gets possession, particularly after getting a defensive rebound, push the ball up the court.  Bigger opponents cannot keep up with smaller, faster players, and easier scoring opportunities can be had by beating the other team down the court.

A fast-paced offense isn’t the only advantage a relatively small lineup can give a team.  With the added quickness, a team can cause major problems for the offense of the opposition.  While at a disadvantage in the post, faster players can disrupt rhythm by cutting off passing lanes, and creating turnovers through steals.  This will make the offense work harder for their shots and wear an opponent down on the offensive side of the ball.

When a team plays small ball, they create space on the court.  Even extending the defense an extra couple feet apart can result in wide-open looks at the basket.  With shooters at every position, bigger defenders are faced with the choice of either make more defensive switches or chasing smaller, quicker players all over the court.  Adding to this advantage is the ability to get out in transition, creating even more space and even better shot opportunities.  Take advantage of the openings the defense gives you, not settling for jumpers unless the defense collapses in the lane.

Defending a small lineup has a unique set of difficulties, even for a good defensive squad.  These lineups create mismatches, either compelling a team to switch their lineup or forcing post players to guard perimeter shooters rather than protecting the rim and rebounding.  By drawing post defenders away from the hoop, the lane is left wide open for layup opportunities.  The help-defense is basically left with the choice of giving up layups with little resistance or stopping the open layup and giving a perimeter shooter an uncontested shot.  Against these unconventional lineups there is more space that needs to be defended, which can be difficult for a more conventional lineup.

Another advantage a small lineup provides is the ability to double-team the other team’s go-to playmaker.  In this system, you can have players roam off of less capable offensive players to help against their primary scorers.  Many NBA teams have taken this approach, including the Miami Heat who, in the 2011 Playoffs.  Miami was effectively able to take Chicago Bulls star and 2011 league MVP Derrick Rose out of the series by using an array of smaller players to double and even triple-team him.  It helps to have one or two players that can defend the post players on the other team, but this is a great tactic for any team that is willing to play aggressively on the defensive end of the floor. 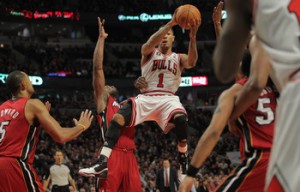 Small ball has been around for a long time because there have always been offensively-gifted teams determined to maximize the advantages that it provides.  Generally, it is advised to use a small lineup as a weapon, and not necessarily as your primary starting lineup.  Using it as a weapon makes it more difficult to game plan for and will keep opponents guessing what your strategy will be.  This will put your team in a position to succeed no matter who you are up against.