He eats like a giraffe, rebounds like Rodman, and motivates like Confucius. He is Adam Folker, a 6’9, 225 pound, redshirt senior for UC Irvine’s men’s basketball team out of Markham, Ontario, Canada. 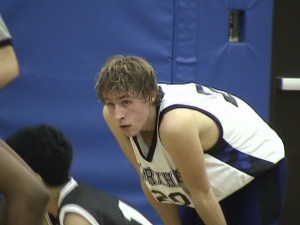 Adam Folker grew up mountain biking, building tree houses and forts, and of course – playing basketball. On snow days, he would shovel his way outside to avoid staying stagnant. As a kid, Folker packed lunches on summer mornings, and stuffed a sack with two basketballs that he’d throw over his back as he mounted a bicycle. He’d ride 45 minutes to the nearest gym at 5:00 a.m. After lunch, he’d continue his workouts to pass the time before playing pick-up games with local businessmen. Folker, a high school student then, picked up a thing or two playing against tougher and older competition. It was not uncommon to see Folker running hills on the nearby farm or flipping a huge tractor tire across the highschool football field. “At the time, I thought that’s what had to be done to win,” Folker said.

An average November day is 32 degrees Fahrenheit, or freezing in Markham. Throughout his formative years, Folker would pull up his truck up to the driveway at night with his high beams pointed towards his home, illuminating a pathway to the hoop. Adam and his brother shoveled snow to clear a court for evenings of one-on-one basketball. Playing with two basketballs – one sat in the house thawing – they dribbled in snow gloves until the ball turned to ice. It usually took about 20 minutes to freeze, and dribbling with gloves was a challenge, but to Folker, it was ordinary.

Dribbling with gloves throughout Canadian winters improved his ball-handling. His hands were so smooth that he was originally recruited as a point guard, before transitioning to forward, on the complete opposite side of the spectrum. The combination of size and steady hands are glorified in basketball, yet after being named to the All-Canadian First Team as a senior at Markham District High School, selected as one of the top five high school basketball players in Canada, and qualifying for the All-Ontario Academic Team, Folker was relatively overlooked throughout recruitment before signing with UC Irvine.

From Markham Marauders to Irvine Anteaters

Now, Folker is a fifth year business economics major playing center for the up-and-coming UC Irvine Anteaters. Last season, he was named the Big West Conference’s first ever Hustle Award Player of the Year, after sitting out the entire 2011 season following serious surgery on his left hip. The surgery required surgeons to shave down his hip bone in order to reshape the femoral head. Doctors told him he would be forced to redshirt and may never play basketball again. He didn’t listen, sitting through hours of coaches and teammates eulogizing his career after the diagnosis poolside at a barbecue. His coaches offered consolation that he could become a graduate assistant with the team, but Folker knew it wasn’t over.

As a junior at UCI, having overcome a broken hand and hip surgery in previous years, Folker responded like any kid who loved the game would have – he went off. Just ask Cal State Northridge. Against Northridge on Feb. 25, 2012, Folker scored a career-high 28 points in just 27 minutes of action, while remaining under reduced minutes as his coaching staff eased him back into action. Folker willed the Anteaters to a 94-85 overtime win, and was locked in all night. He shot 11 of 14 from the field, and scored seven of UCI’s first 11 points in overtime. Folker averaged 8.7 points and 6.7 rebounds per game as a junior, in a season that many told him wasn’t possible. 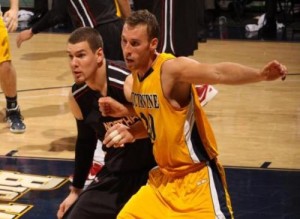 From ice cold basketball games in Markham, Ontario to strength and conditioning workouts on the shores of Newport Beach, Folker’s diligence has only progressed, as has his entourage. In what has come to be known as “The Folker System,” Adam has been branded by his teammates with a social media movement that started as a lighthearted hashtag on Twitter, and has resulted in YouTube videos, a Facebook profile, and a motivational philosophy – the Folker System.

“It’s basically that I use what I have earned through hard work and dedication to help others who have not been given the same opportunities as me,” Folker said, explaining that he hopes to create a foundation someday to benefit others and wants to spread his hard work, business savvy, and dietary preferences to those who seek guidance.

Part of the movement includes motivating others, typically through inspirational tweets: 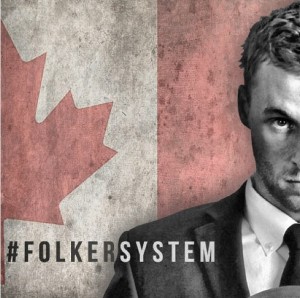 While Folker tries to catch up to Confucius and John Wooden, he’s inspiring teammates to follow his dietary habits. He often ventures out of his way to eat at Salad Republic, while keeping tabs on his iPhone often, emailing a staff of assistants who he outsources administrative duties to. While many students are struggling to pay off student loans amid tuition hikes and budget cuts, Folker runs a business that virtually runs itself.

Along with becoming a stay-at-home boss, Folker has also designed a gluten-free menu that is low in fats and high in calories to improve the health of his teammates. On Sundays, they get two cheat meals, but the rest of the week, they eat spinach, chicken, salmon, and salads, before celebrating at IHOP, Krispy Kreme or In-N-Out on their day of rest.

So there you have a glimpse at the Folker System. It’s about diligence, overcoming unfavorable circumstances, and picturing success. And once that success is attained, it’s about giving back, and never forgetting your privileges. Join the movement.