“You have to expect things of yourself before you can do them.” – Michael Jordan

In order to get anywhere in life, we must start with the strong belief in ourselves that we CAN accomplish whatever we set out to achieve.  It’s easy to say we want to win the championship game or ace a test, but if we take it a little bit deeper, it is not always as easy to have the belief that it’s actually going to happen.  I encourage you to think about a goal you really want to achieve, something that is coming up in the next few days.  Close your eyes and think about that goal.  How does it make you feel?  Are you nervous thinking about what will take to accomplish the goal?  Are you excited?  Are you certain that it is going to happen the way you say?  Are you sure that it will happen?  This is the point where that voice of doubt may creep in and say no, it will probably not happen, or even that it is going to be impossible. 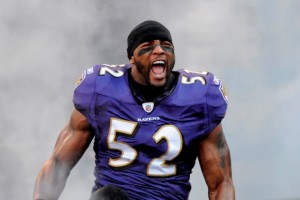 Ray Lewis – “Pissed off for greatness”

To be a champion, you must go beyond these doubting voices and have the deep belief that anything you want to achieve IS possible.  Close your eyes again.  Picture the goal you want to achieve.  If your goal is to win a championship game.. start by thinking of the locker room.  The look, the smell, the feel of everyone getting ready for the game.  Imagine every step, every minute of the game going exactly how you want it to go.  Imagine the last few minutes.  What is the score?  What do you have to do in this moment to win the championship?  Now imagine the buzzer going off and seeing that score, the winning score.  Take in the energy of the crowd going wild around you, your teammates jumping and running on the floor from the bench because it has happened.  You have done it, your team has done it.  The championship is YOURS.  Feel it, taste it, touch every feeling of what it’s like to win that championship game.  Know that you did it.  Where is your belief now?

Ask most great athletes who have ever won a championship and you’ll find that many will say they visualized what it would be like to reach their goal.  They experienced every sensation of the win before it ever happened.  They had to have a deep belief in themselves that they could accomplish what may seem like an impossible task to others, in order to make it happen.  Others may not see it, and may even tell you that your goal is impossible.  But you must see it.  You must know that you have something inside of you that is greater than any doubt or any other voices saying that you won’t be able to achieve your goal.

The most amazing thing about our mind is that we can make ourselves believe that something has happened, before it actually has.  Practicing this deep belief in ourselves and our ability to reach the goal we want to achieve allows situations to line up and go the way we felt and saw as we visualized it.  Just as Michael Jordan says, we must expect certain things to happen before they ever do.  When you expect, and when you are certain things are going to happen exactly the way you visualize, you can smile as the outcome is exactly what you believed it would be.

After a five-year career as a Registered Nurse, Sarah Higgins transitioned out of the medical field and found her passion as a Health Coach and business owner at Active Nutrition. The career path she had been on took a turn when she was introduced to nutrition and fitness as a way to prevent disease and…

2 Responses to "Dream it. Believe it. Live it."