I would have never thought that my weight-loss would be so motivating and inspirational to others. I started this journey after my weight gain started to get out of control and realizing something had to be done in order to have a successful future. Losing weight is many peoples biggest obstacle and is probably the hardest challenge anyone can undertake. I have been there. I know how it feels to have to hold your breath to tie your shoes or having to request a table instead of a booth at a restaurant. Its not just a physical challenge, but much more of a mental/emotional challenge which makes it that much harder. It’s somewhat of a constant battle between the mind and the body. On the other hand, I also know what it takes to overcome it and I want to be that example to everyone showing them that It can be done. Yes, it’s tough and requires a lot of hard work, but it CAN be done! I tell myself if I achieved that goal, then there is no goal that I can’t achieve. I not in top shape, but I continue to work hard to get there and have set more goals to accomplish. 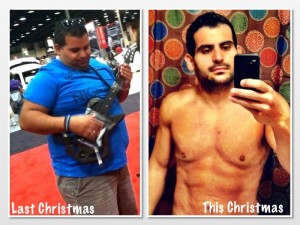 I moved to the United States from Puerto Rico when I was 4 years old. I started playing baseball at very young age and continued playing until high school. After feeling “burned out” from the sport, I decided to put it aside and just focus on academics. At this point, going from a very active lifestyle to a completely non-active one, initially made the weight gain to build up. Heading to college just made things that much worse. Since eating healthy seems to be pretty expensive, many college students eat what they can, thus my case. This continued the weight gain.

It finally set in after a group of friends and I decided to take a little vacation in November 2011 to the Bahamas. Reviewing pictures afterwards, I noticed that my weight had gotten to an all time high and I had to do something about it.

Single and 26, I set my goal to drop 100 pounds from the time we got back from the Bahamas until the next trip, which was planned for March 2012. I had a total of 4 months to try to reach this goal. I set forth on my Journey, in which many people told me it would be impossible.

I began by walking 45 minutes a day until I reached the point where I could jog the entire 45 minutes. I would jog until my body couldn’t go anymore then I would walk until I would catch my breath and then I would start jogging again. At this point there was nothing that was going to stop me from reaching my goals.

With the cardio, I started a high protein/ low carb diet. Fish and Chicken, with a combination of fruits and vegetables became my “best-friends” during this process. Coming from a Latin household, the food aspect was extremely difficult to stick with, but I was determined! Going from eating rice and beans with fried chicken and fried plantains on a daily basis to grilled chicken and broccoli, was extremely difficult. My biggest weakness was sweets. I also had to put all those sweets away and keep focus on my goal. 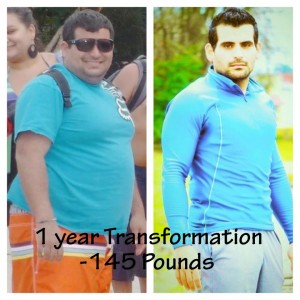 I did not completely eliminate carbs because they are a major source of our energy. I used my “little rule” if it was originally white in color, I removed these items from my diet. These foods consisted of rice, pastas, breads, crackers, potatoes, and tortillas. When it came to eating carbs, I would eat whole vegetables, whole fruits, and whole grain cereals to get those good carbs in and keep my body from getting weak. When eating out, I would order a salad and I completely ate it dry. NO DRESSING! Dressing takes the HEALTHY out of a salad. I also stayed away from Ketchup and Mayonnaise. At times, I use mustard on items or I also squeeze a fresh lime, just to give it a little kick in flavor. I completely removed sodas and juices, they contain a high level of sugar content which was something I was trying to stay away from. I drink nothing but Water!!

I permitted one cheat meal a week, which usually fell on Friday nights. When going out to dinner with friends, I would eat whatever I wanted, but sticking to water as my beverage.